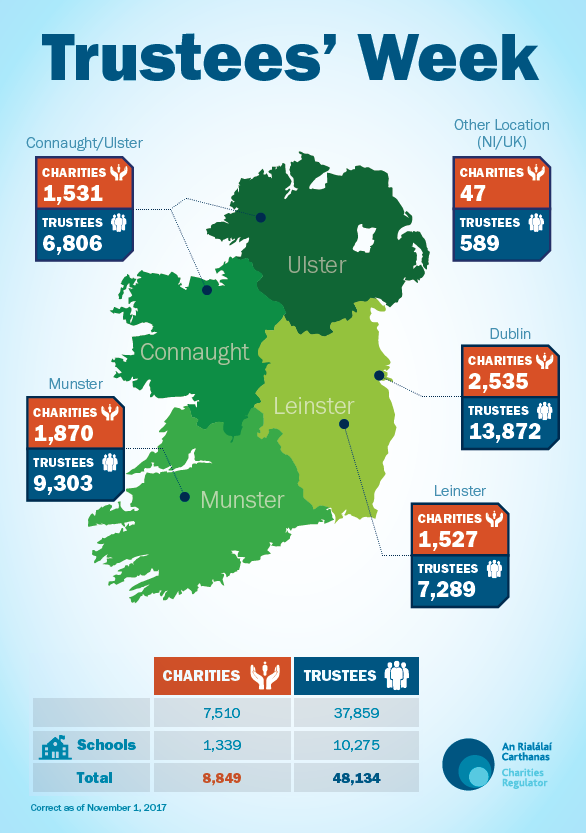 The Charities Regulator will showcase a new online learning tool for charity trustees at public meetings in Limerick and Dublin next week, as part of Ireland’s first Trustees’ Week.

The new e-learning tool will help inform the 48,000 charity trustees about their legal role and responsibilities, in a user-friendly way. “We are committed to supporting charity trustees in their key role,” Charities Regulator Chief Executive John Farrelly said.

The new e-learning tool will enable trustees to inform themselves. It involves animated presentations featuring short blocks of information, followed by scenarios where users are asked to judge what a trustee should do, as well as a general quiz to ensure they understand what they have been shown.

“The Charities Regulator is committed to supporting trustees in their pivotal role in the governance of almost 9,000 registered charities,” Mr Farrelly said.

“Trustees are often the invisible heroes who work tirelessly behind the scenes to keep charities running.”

The Limerick and Dublin meetings will also feature a number of local charity trustees discussing their work, and information for people who are interested in becoming charity trustees.

This is the first time Trustees’ Week has been organised in Ireland. It aims to recognise and celebrate the key role which volunteer charity trustees play in the governance and leadership of charities across Ireland and to encourage more people to become trustees.

The Charities Regulator is part of the steering group behind the week (which runs from November 13-17), which also consists of The Wheel, Charities Institute Ireland, Dóchas, The Carmichael Centre, Boardmatch Ireland and Volunteer Ireland.

“This is an opportunity to recognise them, share some learning and encourage more people to volunteer as charity trustees.”

To register to attend the Limerick event click here.

A full calendar of events is planned for Trustees’ Week, including presentations, a webinar and the Good Governance Awards.

For more information: email press@charitiesregulator.ie or contact Eamon Timmins, Head of Communications and Stakeholder Engagement, at 01-6331517 or 087-7520978.