Registered Irish charities have an income of €14.5 billion, directly employ 189,000 people and are supported by 300,000 volunteers, according to research on the social and economic impact of charities in Ireland, published today.

The report by Indecon International Economic Consultants, commissioned by the Charities Regulator, shows that registered Irish charities have a direct, indirect and induced* expenditure of €24.98 billion and support 289,000 employees.

Indecon’s analysis uses data from the Register of Charities at the end of 2017, including information from annual reports provided to the Charities Regulator. Financial information regarding 5,746 charities was analysed as well as data from the Central Statistics Office.

"In addition to highlighting the significant economic and social impact which charities are making in communities across Ireland and globally, the report highlights the wide diversity of organisations which are registered as charities in Ireland,"

"At one end of the scale there are large hospitals and universities with budgets funded by the Exchequer, extending to hundreds of millions of Euro, and hundreds of paid staff. Many of these are large charities engaged in delivering critical health, education and social services.

"At the other end of the scale, there are completely volunteer-led organisations, providing services at community level, with small budgets."

The research shows that the Government and public bodies are the largest source of income for registered charities accounting for more than half the total funding (€7.7 billion).

Volunteers are also an important resource for charities, with the 300,000 volunteers donating 67.9 million hours (an average of 226 hours annually per volunteer). Based on the minimum wage, this is worth €649 million per year.

The report was launched today (July 25) by the Minister of State at the Department of Rural and Community Development, Seán Kyne.

"Charities have a huge social and economic impact

"While we have known this for a long time, this very valuable report allows us to talk about charitable organisations and the broader sector with some degree of precision.

"The scope of the different challenges and opportunities is thus becoming clearer, and Indecon’s report outlines further areas that we might explore in more depth, for example, the particular focus of charitable organisations and employment levels in charities. This research and gathering of data is critical in terms of informing decision making and policy."

The report analyses registered charities under a number of categories. Some of the headline findings are:

The Indecon report is the first piece of research commissioned by the Charities Regulator as part of its function to publish information concerning charities. Mr Farrelly said the report’s findings would assist the Regulator in its work to monitor and regulate charities in a proportionate manner, and feed into the creation of its next strategic plan.

"The research will also help donors, beneficiaries and the public to broaden and deepen their understanding of the role of charities in modern Ireland," he said. The Charities Regulator also hopes the report will facilitate the development of evidence-based public policy to support charities in Ireland.

The report notes that its findings have potentially important implications which should be considered by the Charities Regulator and by policymakers. It points to the need for: 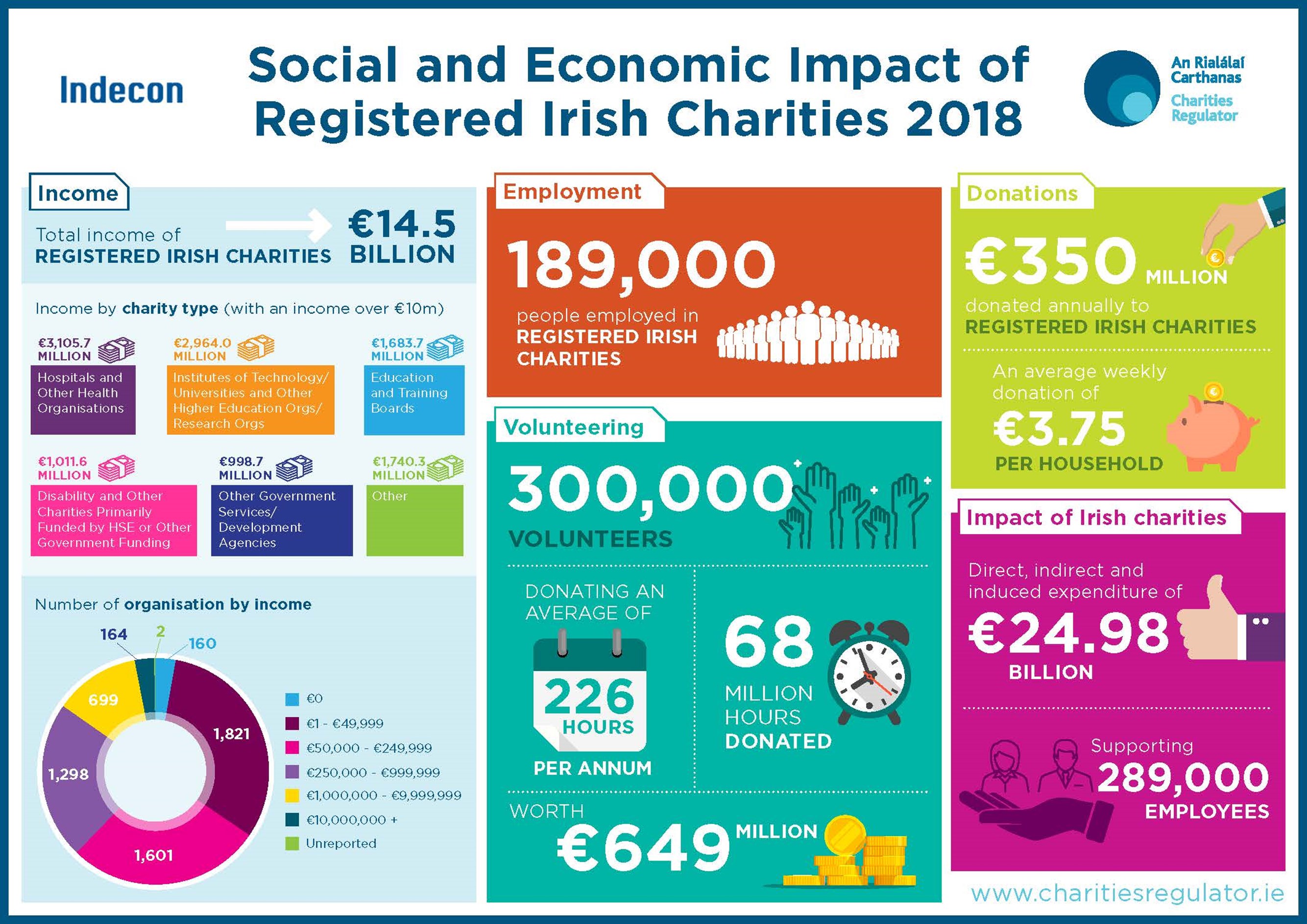